A model used to help an East Midlands PCT plan for projected growth in demand due to population changes.

The population of an East Midlands town is expected to double in the next 10 years, and the PCT wanted to know what health services would be required to meet the needs of the population.  The future of the local hospital was also the subject of debate, so the PCT and the hospital wanted to understand the impact of population growth on any future plans.

The hospital had an A&E department with attendance of fewer than 30,000 a year. One of the questions under consideration was whether the A&E department should be turned into an Urgent Care Centre, dealing with minor injuries only. This posed further questions about what the future purpose of the hospital should be. However, if the local population doubled in size, would this change the decisions about the nature of the hospital?

The PCT used Scenario Generator to model the expected growth of the population as new housing developments were occupied over the next 11 years. The model was validated to ensure that the baseline represented the current pattern of health service use in the town. Particular attention was paid to A&E attendance, admissions and outpatient appointments.

The PCT also considered current outpatient activity in the town, debating the matter in a series of workshops set up to discuss the future of the local hospital. The discussion centred on:

The PCT aimed to use the results from the workshops, data analysis, simulations and modelling to inform a public consultation on the future of the hospital, and to build on the experience to extend modelling and simulation techniques to the PCT’s Strategic Plan.

Further Scenario Generator scenarios were run, taking into account the population growth and reducing outpatient appointments carried out in hospital. Results showed that costs to the system could be reduced over time. 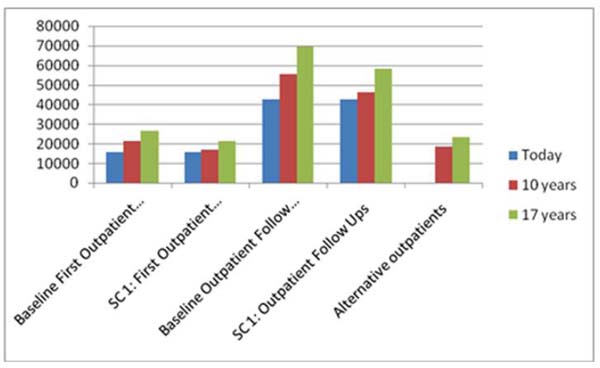 Considering these results caused the PCT to think about current outpatient activity in more depth. A potential saving of £2.1 m was identified with the further advantage of saving 11,800 patient journeys to hospitals 20 miles away.

At the same time, further Scenario Generator modelling was carried out to understand the impact of dealing only with minor injuries in the local hospital, and whether the increased population would require additional services. This demonstrated that the additional population would only increase demand on the A&E by a further 8000 patients, which would still not be sufficient to sustain an A&E department.

Simulation and modelling provided the PCT with a means to understand the way in which the town population uses the health service from first point of contact through to more complex forms of heatlhcare.

It enabled them to understand:

More information about Scenario Generator can be found at: www.scenario-generator.com