A simulation study of emergency stroke care showing the impact of different interventions. Application has greatly improved the delivery of thrombolysis at the client hospital.

The only drug for treatment of acute stroke – alteplase – is licensed for use in the first three hours of stroke after onset. Treating patients within this limited time window has proved difficult in practice and the uptake and provision of thrombolysis remains limited across the UK along with the rest of Europe and the US.  In addition to increasing the proportion treated it is also highly desirable to treat patients more quickly, as early thrombolysis for acute ischemic stroke is essential to maximise the proportion of patients with no disability post treatment. The Peninsula Collaboration for Health Operational Research and Development (PenCHORD) a research team based in the Medical School at Exeter University collaborated with the acute stroke team at the Royal Devon and Exeter Hospital (RD&E) to evaluate and select changes to the emergency stroke pathway to increase thrombolysis rates and reduce disability.  The project took place in the first half of 2011.

Computer simulations were developed that explored different ways in which people who have suffered a stroke are managed between arriving at hospital and receiving clot-busting disability-saving treatment.  Simulations consider the number and level of healthcare professionals involved with each case, the time of day or night, and how busy the different hospital departments involved in this pathway are.  The simulations allow us to calculate the benefit, measured in terms of patients free of disability from their stroke, from alterations to the emergency pathway for stroke.  We followed up the study with a comprehensive evaluation of changes indicating that thrombolysis rates had significantly improved. 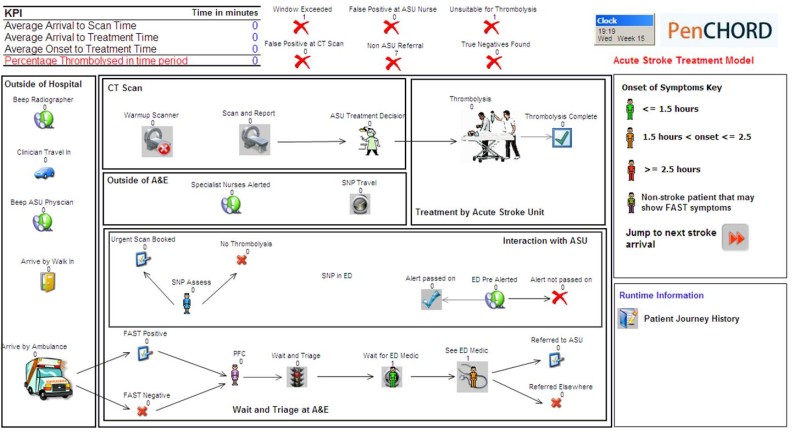 We developed a discrete-event simulation from prospective data for patients with stroke arriving at the RD&E. We modeled current practice and assessed the impact on stroke outcomes of measures to reduce in-hospital delays to alteplase treatment and of extensions to the European license for alteplase from 3 to 4.5 hours and to people aged over 80 years.

The pathway was modelled as it operated at the start of the study.  A number of potential changes to the pathway were then evaluated using the model and compared against each other.  We quantified benefit in terms of treatment speed and used published research to convert these figures to additional patients with no disability post stroke.

Graph showing simulated effects for a range of different interventions 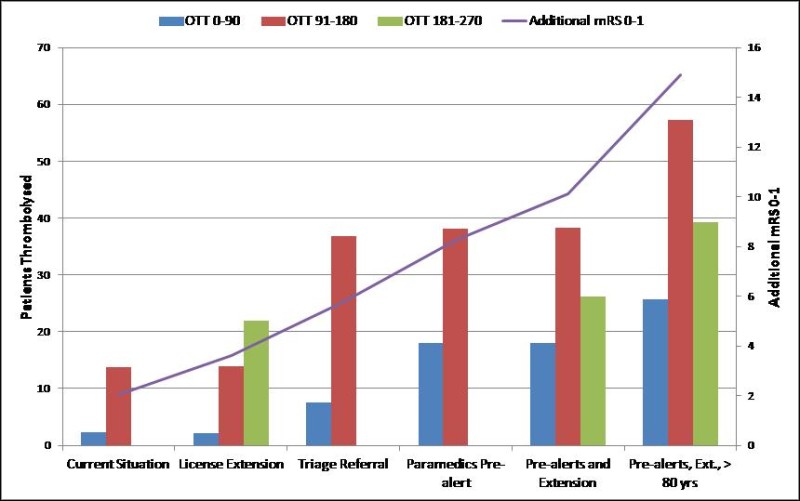 In addition to these changes evaluation also considers the publication of the IST-3 (May 2012), a large trial indicating benefit of thrombolysis in stroke patients over the age of 80. The thrombolysis rate in 2012 was notably higher than in previous years and has continually increased throughout the 2012.  Arrival to treatment times halved over this period.

The work was disseminated to the other trusts in the Devon and Cornwall and three follow on projects have been completed at North Devon District, Derriford Hospital and Royal Cornwall Hospital Trust.  These have also prompted trusts to redesign their emergency stroke pathways. 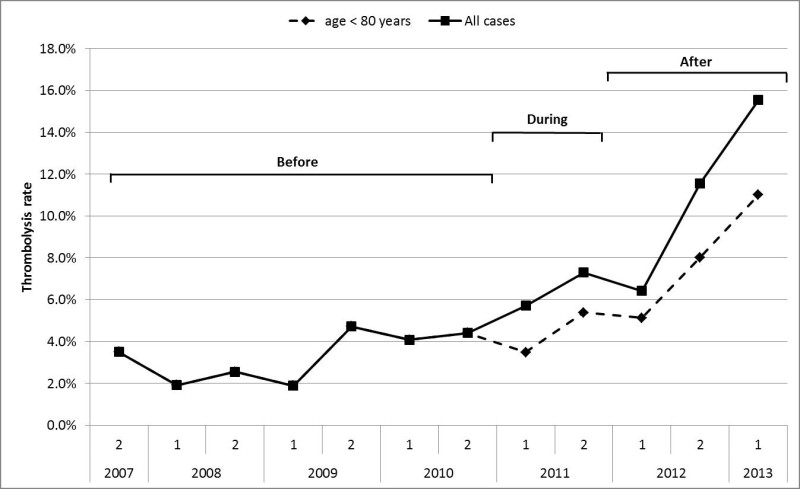 For full information about this case study (and others by PenCHORD) go to: http://clahrc-peninsula.nihr.ac.uk/penchord

Journal Publications relating to this work are as follows:

The Peninsula Collaboration for Health Operational Research and Development (PenCHORD)